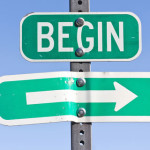 Signs. What would we do without them? They provide guidance when we are driving, shopping in a new store, or simply trying to find our way around a building. These are society’s signs. Signs made by people for people. But the signs I want to talk about are God’s signs. These are the signs that guide you on your journey through life and help you find your place in the world. Recognizing and following these signs brings excitement and meaning to life. They are the most important signs there are. Many important decisions in my life have come from the guidance I received through God’s signs. For example, my first job after getting my doctorate came to me in this way. My wife and I were living near the small, rural town of Fordyce, Nebraska when I completed my degree in counseling at the University of South Dakota (USD). Since she still had a year of clerkships to complete before she received her medical degree from USD, I focused my job hunt in the more populated towns of South Dakota just across the Missouri River from Fordyce. Unfortunately, my searches produced no meaningful leads and things were not looking up. Then one day I received a letter, a form letter, as I recall. It was inconsequential in every way except one. Instead of listing my residence as Fordyce like all of my other mail, it listed the town of Wynot, Nebraska as my home. This both puzzled and intrigued me. I had never even heard of the town before I received the letter. As I reflected upon it, the name Wynot, Nebraska transformed itself into the question, “Why not Nebraska?” In other words, why not look for work in Nebraska? Following this hunch my wife and I did some research and found out that the USD School of Medicine had a clerkship agreement with Creighton University in Omaha. When I expanded my search to Omaha life smiled upon me and I quickly found a full-time counseling position. That letter was one of God’s signs guiding me to my home. The story does not stop here, however. We stayed in Omaha just a year before moving to Reno, Nevada, where my wife would begin a residency in psychiatry. Once again I was without a job and once again the prospects were few. While I looked for a position as a psychotherapist I worked a temporary job making cardboard boxes at the Boise Cascade factory in Sparks, NV. One day when I was feeling rather down I recall looking out a loading dock door to see a beautiful rainbow above the mountains to the west. The rainbow is a symbol of hope and of promises fulfilled. That rainbow reassured me that my days of cardboard paper cuts would eventually come to an end. After two months of box making I was invited to an interview with the managers of an inpatient mental health unit at the regional hospital in Carson City. The meeting went well and they said they would give me a call regarding their selection within a week. On my way out of Carson City I stopped at a gas station and in front of me was a truck with a license plate that read “Y NOT.” In addition, on the rear window was a bumper sticker advertising “Barb’s Y-Not Saloon.” “That’s interesting,” I thought, reminded of my Wynot, Nebraska letter. I chose not go to Barb’s saloon. The bumper sticker and license plate were all the refreshment I needed. Two days later I was offered the job I would enjoy for many years. As you look for and pay attention to the signs in your life, you learn their language. This becomes your personal language with God. Cherish it. There is nothing more wondrous in life than the magic and mystery of your personal journey.